This study mode is made available due to COVID-19. Once the situation improves, arrangements will be made to reinstate classroom delivery in full. 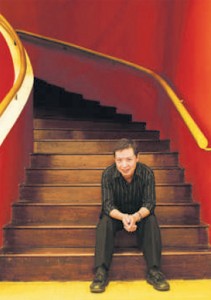 IF you’re ever at Toast Box in Katong 112, you might spot local author Felix Cheong sitting in the corner by the window, hunched over a few sheets of paper and possibly giggling to himself.

It’s his favourite writing haunt, reveals the 48-year-old. And if he isn’t busy writing, then he’s probably there to get inspiration the old-fashioned way: by observing people around him and eavesdropping on their conversations.

That’s exactly what he did last year while working on his latest book: Singapore Siu Dai: The SG Conversation in a Cup. The book is a collection of 50 short stories satirising daily life in Singapore, like the woes of taking public transport, our kiasu behaviour, and obsession with Hello Kitty plushies, peppered with single page cartoons by a graphic artist who wants to be known only as PMan.

This book is Cheong’s first attempt at writing humour and, according to him, it came about entirely unplanned – especially since his last eight books have mostly been poetry collections, with a couple of young adult novels.

But he believes it’s a good time to release such a book, because the time is just right for a little satire here in Singapore, says Cheong, who has a background working in the media industry for about 22 years and now lectures part-time at local institutions.

“I’ve noticed since the 2011 elections that Singaporeans are getting very unhappy,” he says. “A lot of the rhetoric and unhappiness stems from the fact that we take ourselves very seriously. To quote a famous cartoon character, “Why so serious?” . . .

That’s why now we have shows like The Noose, and websites like New Nation, and I think this book is contributing to that conversation too.”

It all started with Cheong taking long commutes between home and schools, so he decided to challenge himself to write a short story within each 45-minute time frame and post it on Facebook. When more of his friends liked it, he realised there was a market for that kind of short satire.

One of his favourite stories in the book is titled Language Therapy for Teens, and it follows the dialogue between two unnamed people: person A who obsessively uses the word “like” as a filler in every sentence, and person B who tries to convince person A to drop the filler and speak proper English.

This story was inspired by some of his own students at the schools where he teaches, because a lot of his students have that habit while giving presentations, says Cheong.

“I don’t really base my characters on real people though, because I may get sued. So I tweak them enough so they are types that people can relate to, rather than recognisable individuals,” he adds.

And by relating to his characters, Cheong hopes his readers will have a good laugh and learn to take themselves less seriously.

“That’s what a satirist does, after all. I notice the gap between what is and what could be, and that’s where I come in and poke fun at it,” says Cheong.

“I hope it will help lighten the mood in Singapore – that’s my big aim.”

About
Felix Cheong is the author of nine books, including four collections of poetry and a short-story collection titled Vanishing Point, which was longlisted for the prestigious Frank O’Connor Award in 2013. In 2000, he received the National Arts Council’s Young Artist of the Year Award for Literature. In 2004, he was nominated for the Singapore Literature Prize. Felix, who has a master’s degree in Creative Writing, is currently an adjunct lecturer with the University of Newcastle and Murdoch University. His latest book is a collection of satirical tales called Singapore Siu Dai.